By Constance Cox, based on the story by Oscar Wilde 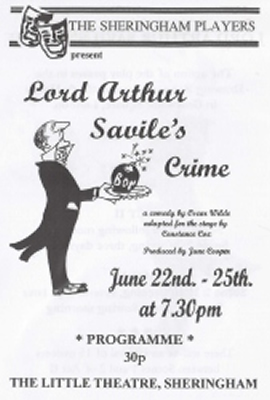 In this latest polished production from the Sheringham Players, we enter the world of London's chattering classes in the 1890's, where Podgers, the cheiromantist (a posh word for fortune-teller), has "society" eating out of his hand.

This amusing satire, adapted from an Oscar Wilde short story, takes as its starting point the absurd premise that your past, present and future are plain to see in your palm, and then relentlessly lampoons those stupid enough to believe it.

Lord Arthur Savile is "a true son of the nobility"; ignorant and uncultured but apparently harmless.

H is engaged to Sybil, a flighty young thing with a ramrod of a mother.  Despite the cynicism all around them ("there's nothing cheerful about marriage"), they seem a happy couple.

then Podgers intervenes, reading in Arthur's hand that he will commit murder some time in the future.  Not wanting to let "selfishness triumph over love," brainless Arthur decides he must murder straightaway - it doesn't matter if it's a stranger or one of his own family - to prevent any blot on his marriage

Aided and abetted by the trusty butler Baines (whose "loyalty" seems suspect) and a "bumbling incompetent" anarchist Herr Winkelkopf, the play's second half is a farcical tour of botched attempts at murder.

The set is suitably opulent (lots of silverware and sherry), the costumes are fabulous (lots of flounces and feathers), and the acting passes muster.

You'll have a good time if you go, but don't forget this is Wilde - his humour has bite.