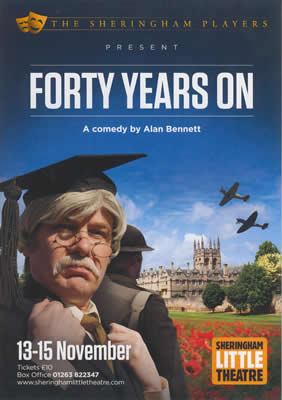 Sheringham Players' directors Bernice Escott and Moya Leighton met playwright Alan Bennett at a book signing in Holt, and their inspiring exchange led to this show.

Each little sketch builds into a larger play following the memories and literary loves of a retiring headmaster.

John Standish as the venerable pedagogue is truly brilliant, not least because he manages to keep track of his speeches and the rest of the action on stage as well.

Escott and Leighton's directing brings an effortless flow to the action which feels just right.

The seventeen-strong cast really work their socks off and clearly love the material.

This rare outing of Bennett's early play was a treat.