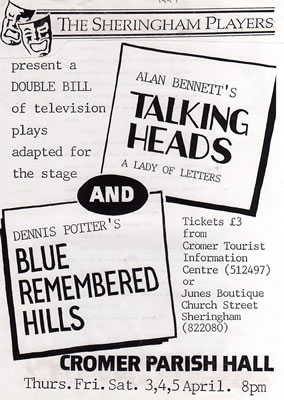 Drama written for TV does not adapt easily for the stage. Location filming, instant scene changing and close-ups on individual actors are not possible in the theatre.

So it's a brave man who sets out to produce a double bill of TV plays on the poorly equipped stage of Cromer Parish Hall.

When I first saw Dennis Potters Blue Remembered Hills on TV many years ago it struck me as nostalgic rather than funny. But Derek Bull's production was a riot of boistrous fun from the first sight of seven grown adults acting as young children right up to the ending tragedy.

Thoroughly enjoying themselves, the cast kept the audience laughing by throwing themselves into the rough and tumble and playing heavily on their well-observed childlike antics and posturing.

The death of Donald in the realistic barn fire was excellent stagecraft which suddenly switched the mood from comedy to tragedy.

All the actors were credible as children - despite many decades of age gap, but David Long as Willie probably made the transition most plausibly.

Talking Heads, a more recent TV presentation, is a series of monologues by Alan Bennett. A Lady Of Letters was the story of Mary Ruddock, who observed the world from her window and wrote a lot of letters.

Unfortunately her Platignum turned poisonous and she ended up in prison where her sad life was transformed as she started writing letters for people instead of against them.

Peggy Francis entertained the audience for almost ¾ of an hour with Miss Ruddock's tales of life's troubles and joys. Her timing was perfect and she carried us along with Alan Bennett's shrewd observation, comedy and pathos. It would have been much easier on TV with the camera's close concentration, but Peggy's solo performance was wonderful theatre.

The double bill received a standing ovation on the night I saw it.This was well earned by Derek Bull and his company - his bravery was rewarded.