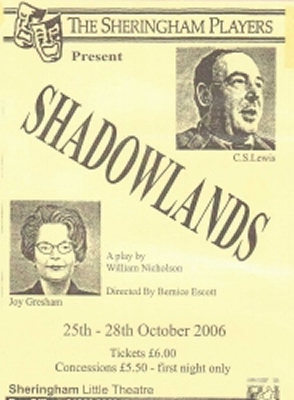 The Sheringham Players, directed with skill and sensitivity by Bernice Escott, take on the challenge of an emotionally and intellectually complex drama with heart and soul.

Jack, the author CS Lewis of the Narnia Chronicles, is living the comfortable-cardigan life of an Oxford bachelor don with brother Warnie (a relationship wonderfully drawn by Graham Blyth and Kees Van Woerkom).

Until, that is, Joy Gresham (Sarah Westlake), feisty New Yorker, bursts on to the scene in a blaze of wit and colour with her young son Douglas hugging his Narnia book to his chest.

Jack's friends disapprove of Joy ("Americans don't suite understand inhibition" quips one) and Jack is diffident, but the gradual blossoming of his love for her brings much fun, passion and tenderness before a tear-defying conclusion.

Westlake and Blyth give towering performances in the central roles, with fine support from John Meikle and Greg Pope as Jack's college buddies.

Oliver Westlake plays Douglas with an acting maturity way beyond his years, providing - with Blyth a powerful final scene.

Some beautiful music, specially written and performed by Louise Willoughby for this production, adds another dimension to a fine evening's theatre.