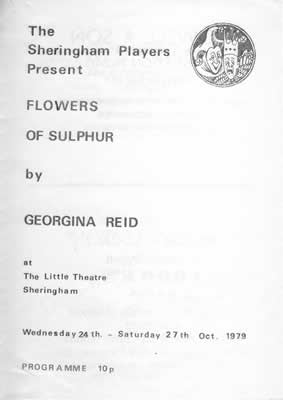 Sheringham Players bounced back on to the stage of the Little Theatre this week with their third production of the year.

Their latest dramatical enterprise, which opened on Wednesday night, is the rather far-fetched comedy "Flowers of Sulphur," by Georgina Reid.

Set in 1905, the play has a weak plot, lacking adhesion, which would present a stiff challenge for any amateur company. But Sheringham Players glided through with hardly a hiccup and squeezed out every drop of humour contained in this tepid comedy.

Frustrated by his 10 year absence, his wife vows she will sell her soul to the devil to secure his return. And it just so happens that at this point lodger Mr. Nicholas (Raymond Murton) appears on the scene.

The only real disappointment of the opening night was the poor attendance. "Flowers of Sulphur closes its run tomorrow evening.