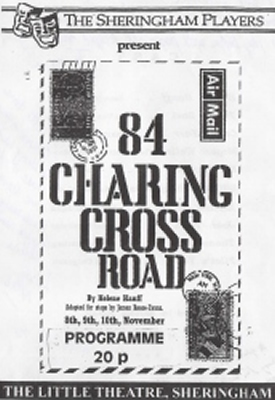 Sudden snowfall meant that the drama began before I reached the theatre. But on arrival, the faithful few were met with the heart-warming true story which, sadly, didn’t work on stage.

American writer Helene Hanff exchanges letters with a fusty antiquarian bookseller. When she begins her correspondence, her exuberant Bohemian wit is met with the written equivalent of a limp handshake.

ut over 20 years of persistent literary small talk and food parcels, her radiant friendship succeeds in thawing the icy English reserve. The Sheringham Players tried hard to recreate lively drama from what is essentially a heap of letters, but the years went by slowly.

Jennifer Stevens makes a suitably fiery Helene, but consecutive monologues become static viewing. Britain, however, does begin to emerge as a character in the drama. We witness her climbing out of rationing and depression into the hopeful air of the 1960s, when even starchy old Frank, the bookseller, admits to a fondness of the Beatles.